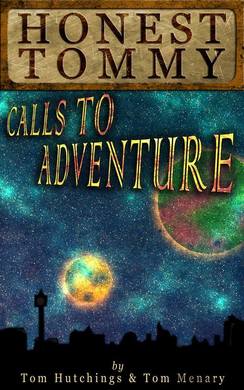 The Great British Space Empire is at its height. Queen Victoria reigns from within her iron lung. And there are dastardly happenings afoot across the Fifteen Galaxies, as the peoples and peons of the Realm call out desperately for heroes of space and legend....

Jump head-first into adventure with these tales of wonder and astonishment from Honest Tommy. Join Captain Dashworth as he endeavours to prove himself the great hero of his best-selling Penny Amazings on an escapade in London Town; follow Commander Gwen's harrowing trial aboard a doomed freighter in the black depths of space; marvel at the mad Professor Runcible as she concocts something even more bizarre and arousing than usual; quiver at the approach of a deadly killer robot as Princess Victoria faces a gunpowder plot deep beneath Westminster; and feast your eyes on an excerpt from Ensign Benson's diary as a lowly tea boy on that pestilent battlefield, Vorgak 3!

Each of these original tales, written by Ted Hutchings and Tom Menary, feature characters appearing in Honest Tommy: The Radio Adventures, and are collected here for the first time.

Honest Tommy: Calls to Adventure was released on 31st August 2017, and is available to purchase for Amazon Kindle.